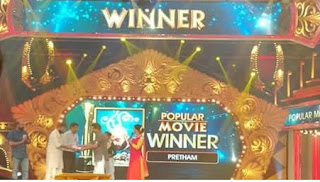 The show, which include many stellar performance from the stars of mini-screen, will be re-telecasted again due to its popularity among malayali audiences. The main objectives of this award is to honor and encourage the mini screen talent of Asianet. The awards were distributed in more than 30 categories, including best actor, actress and best serial. Malayalam actors Mukesh & Jagadeesh got “ Golden Star Award “ for their notable offerings to Television Industry. Ramesh Babu, the producer of Sthreedhanam serial, receivedhonor for ahieving the record of longest running serial in Malayalam Television history.

The winners of Kerala State Television Awards 2015 have been announced by Kerala Chalachitra Academy on Friday, June 3, 2016.The awards were selected from the entries submitted for the award.

The winners of Kerala State TV award 2015 in the feature section were selected by the jury members including, Chairman Nemom Pushparaj, Sona Nair, Anil Thomas, Salam Bappu, VIjayakumar and CR Rajamohan. The awards in the non-feature section were selected by a five-member jury chaired by Suresh Shivadas while the winners in article category were determined by a Jury chaired by Sreebala K Menon.

Malayalam Channels Flowers TV and Mazhavil Manorama bagged most of the awards in the feature sections. The detailed list of Awards are given below.