Chandanamazha the popular malayalam serial on Asianet which started telecasting on 3 February 2014. Chandanamazha is a remake of Star Plus hindi Serial 'Saath Nibhaana Saathiya' has completed 980 Episodes. It is one of the longest and successful serial on Indian Television. The serial is among the top five serials in malayalam according to BARC ratings.

Ever since, Meghna Vincent decided to quits the serial every one is asking about who will replace her in this serial. Now Asianet is airing promos projecting Vinduja Vikraman as the new heroine of their super hit serial Chandanamazha. It will be a big turning point to her career due to the popularity of the television series.

Vindhuja Vikraman is a model and actress from Trivandrum. She completed her schooling from Bharatiya Vidya Bhavan, Kodunganoor. She is currently acting in Amrita Tv's Serial Kali Gandaki and in Athmasakhi (Mazhavil Manorama). She is the heroine of that serial directed by Madhupal. She also appeared in Actress Annie' kitchen talking show Annies Kitch with the members of Kali Gandaki 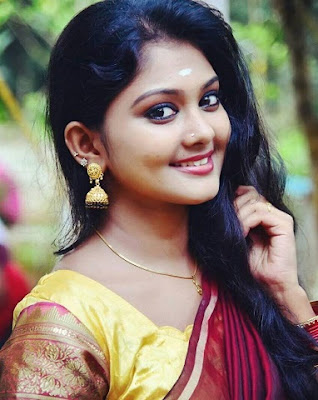 Chandanamzha directed by Sujith Sundar and Produced by Ross Petals tells the story of Desai family and the family members.

Shalu Kurian as Varsha, Roopa Sree -as Urmila Desai,Subramani(an) -as Arjun,Pratheesh Nandan -as Abhishek,  Yamuna -as Madhumathi ,Kanya as Mayavathi, Dinesh Panikkar -as Devaraj,.R. Omana -as grand mother,Murali Mohan -as Jayapal etc are the main actors/actress of the family drama

Actress Meghna Vincent quit the serial to focus on her marriage and rumors were spreading about. But we have posted the reasons earlier and the link it below.