✔ Vinodadarshan
Asianet TV
Malayalam Television
Asianet is to launch the Malayalam version of the popular music game show ‘Start Music’ which is now a mass trend in South Indian television.  Asianet will start the telecast of ‘Start Music – Aaradhyam Padum’ on August 10. It will be telecast every Saturdays & Sundays at 9.30 PM.

This music and game show ‘Start Music –Aaradhyam Padum’ will see film/television stars and celebrities participating in various funny and exciting segments. Serial stars of Vanambadi serial will participate in the first episodes. The show which features non-singers is expected to be an exciting game show for music lovers. This is not about how you sing, but about who will sing first. Apart from the fun games, there will also be a special treasure hunt for the winners of each round.


The competition in 'Start Music' is conducted between two teams who will be tested for their knowledge in Malayalam music. The non-singers will have to face questions and tasks about the same and win exciting prizes. The game will have a live DJ and there will be two in-house singers to help the contestants. 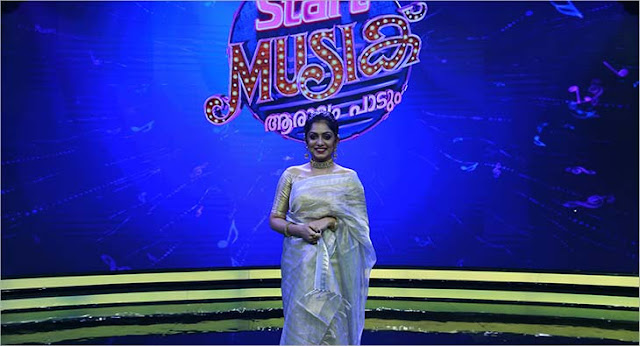 Arya, malyalam actress , will host the show. She is known to malyalam audience through her performance in Badai Bungalow show. She recently joined in Badai Bungalow 2' . This is her debut as host of a game show.  In interview given to a National daily she commented that  "I am so excited to host the show. I can't wait to have some real fun with the contestants. I am equally happy for being myself in a TV show.” Full details of the teams and contestants will be updated soon here.