✔ Vinodadarshan
Actress
Artist Profiles
Awards
Surabhi Lakshmi winner of  Best Actress Award at the 64th National Film Awards 2016: Surabhi Lakshmi bagged the Best Actress award for her film ‘Minnaminungu’ at the 64th National Film Awards 2016. The awards were decided by a Jury with popular director Priyadarshan as the jury chairman.She was the winner of special award for best actress in 47th Kerala State Film Awards  for 2017 for the same movie.

Even though she lost the best actress award at the State Film Awards to Rajisha Vijayan, she made it at the National Level. She has won Film Critics Award for Second Best Actress in this year. Surabhi Lekshmi is the daughter of Andy and Radha from Calicut. She is married to Vipin Sudhakar (Photos). 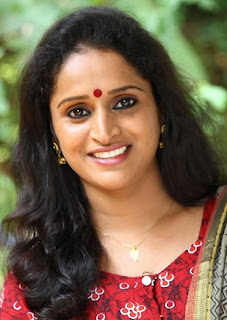 Surabhi Lekshmi  hails from Kozhikodu is a trained dancer and theatre artist.  She is very popular as the character Pathumma, wife of Moosa,  in Media One serial M80 Moosa. Her unique sound and dialogue delivery in Caliccut accent were noted by the audience soon. She won best Comedy Actor award for  her role in M80 Moosa at the Flowers TV comedy Awards 2016. She has acted in more than 20 Malayalam Films, advertisements and Malyalam Serials. She portrayed a main character in   K.K. Rajeev's malayalam serial Kathayile Rajakumari.  Surabh is now part of  surya Tv Television show Laughing Villa season 1 & 2 and  Media One comedy show M80 Mooosa.

Jury Chairman Priyadarshan conveyed that Surabhi showcased brilliant performance which is why recognition came her way. According to the jury Surabhi won the best actress award for "Showcasing her brilliance in portraying pain and ecstasy of a mother in a deplorable social condition". She is the fifth actress to win National Award in Malayalam after Sarada, Monisha, Shobhana and Meera Jasmine. Meera Jasmine was the last Malayalam actress to win the best actress National Award in 2004 for her performance in Paadam Onnu: Oru Vilapam

Surabhi is happy and elated to be recognized for the prestigious honour in movie Industry. Surabhi thanked every one on her award on her facebook page. Her message below.