Hatim Veeragadha is a Malayalam Television Serial on Asianet launched on 31 March 2014. The serial will be telecasted every Monday to Friday at 1030 PM on Asianet TV.

Hatim Veeragatha is the dubbed version of Life Ok Channel thriller drama show in hindi 'The Adventures of Hatim' premiered on December 2013.

Story line: The serial narrates the journey of a normal man who goes on to become the savior of the world. The story of Hatim Veeragatha is based on the life of Hatim Tai, who was a prince and great Arab poet and was the father of Adi bin Hatim and Safana bint Hatim who was the companions of the Prophet Muhammad. Hatim Tai lived in the sixth century CE. He also figures in The Arabian Nights.

The story is set in the Middle East around the Middle Ages . Hatim has to solve seven questions to defeat the evil sorcerer lord Dajjal aided by Najumi. The story has elements of fantasy. Watch the serial to know more exciting events in the life of Hatim. 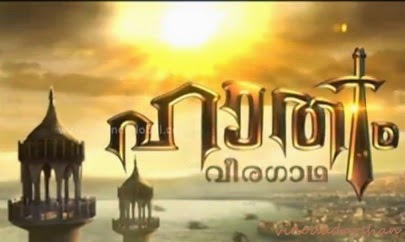