Jennifer Winget is the heroine of the Surya TV serial Premam. Premam is the dubbed version of hindi Serial Beyhadh produced by Prem Krishen Malhotra and Sunil Mehta for Sony TV. It is premiered on 11 October 2016 on Sony TV and Sony TV Asia and has completed nearly 165 episodes.Premam is directed by Vikram V. Labhe based on a screenplay by Shilpa F D'Mello and Dialogues by Radhika Anand based on a story by Priya Ramanathan & Prateek Sharma. Tamil version Beyhadh is aired as Maaya on Polimer TV at 7:00 P.M from Monday to Friday. Mukul Puri and Elvis Nishant are music director of this romantic drama.

The story analyse the selfless love and selfish obsession. Maya is the owner of fashion and the city and falls in love with Arjun, a photographer. Saanjh, his best friend is a lawyer. Maya's love for Arjun started to affect their relationship with respective families. Kushal Tandon, Jennifer Winget, Aneri Vajani are in the star cast of Premam. The role of heroine Maya Malhothra is played by Jennifer Winget 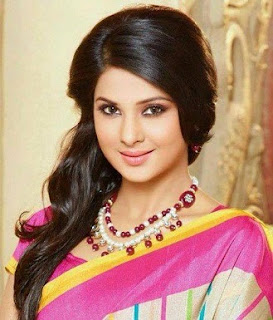 Jennifer Winget is a very popular TV and film actress. She started her career as a child actress in Hindi movie Akele Hum Akele Tum. Leter she appreared in many movies and established her self a super star in Indian Television. She is known to Malyali Audience through Swayamvaram serial on Asianet plus, the dubbed version hindi hit serial Saraswatichandra from Sanjay Leela Bansali.

Jennifer's parents hails from Panjab and Maharaksthra in India. Winget married Karan Singh Grover on 9 April 2012 and they divorced in 2014. Jennifer Winger is .