Mouni Roy is the heroine of the serial Naga Kanyaka,snake-woman. It is the dubbed version of Colors TV Show Naagin. It has Season 1-3. The first two seasons are already aired on Colors TV. Now it is the turn of Surya TV followers to watch Season 2 . Mouni Roy will be part of Season 3 of this series. The launch date of Naagin 3 is not yet announced.

Hindi Serial Naagin telecasted on hindi language channel Colors TV since 1 November 2015. Naagakanyaka was launched on Surya TV on 20 June 2016 at 9:00 PM. Naagakanyaka 2 will be launched on Surya TV on 19th June 2019. The story of Naagin series is written by Mrinal Jha,R M Joshi,Neha Singh and directed by Santram Varma, Chandni,Niraj, Lalit Marathe, Rakesh Chowdhury. Shobha Kapoor and Ekta Kapoor are the producers of this TV series under Balaji Films 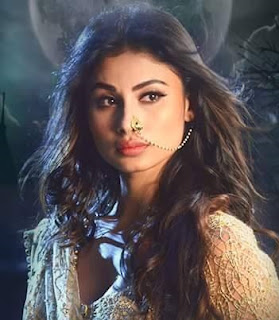 Naagakanya supernatural fantasy thriller has gained popularity that helped to rise Surya TV's channel ratings. Mouny Roy played the role of Shivanya in Naga kanyaka. In the second season  of Nagaknaya she will play the aged version of Shivanya and the younger version of her daughter Shivangi. She will portray the main character in Naagakanya 3

Mouni Roy-Biography
Mouni Roy is a very popular TV actress and model and is from West Bengal . She is a trained Kathak dancer and was finalist of dance reality show Jhalak Dikhhla Jaa in 2014. She ahs acted in many Indian TV shows and serials  She is known to Hindi audience as Krishnatulsi in Kyunki Saas Bhi Kabhi Bahu Thi, and Sati in Devon Ke Dev Mahadev and for playing Shivanya Ritik singh and Shivangi Ritik Singh in Naagin .

She is a familiar face to Malayalam audience as Sathi in Kailasanathan on Asianet, dubbed version of Devon Ke Dev Mahadev . It was a very popular serial on malayalam mini-screen.  He popularity increased when   Naagakanyaka, malyalam dubbed version  of Naagin -Mohabbat Aur Inteqaam Ki Dastaan is created by Colors TV, was launched on Surya TV.  In Nagakanyaka,  her role was of the heroine Shivanya, a serpent who can change her shape based on her wish. The mystical thriller is one of the top rated serial on Indian Television.
The first season  of Nagakanyaka starred Mouni Roy, Arjun Bijlani, Adaa Khan, and Sudha Chandran.The second season stars Mouni Roy, Kinshuk Mahajan, Karanvir Bohra, Sudha Chandran, Adaa Khan and Aashka Goradia Sudha Chandran


Arjun Bijlani plays the role of hero Rithvik in Naagakanyaka. He is now the hero of  Akkareyanente manasam on Asianet Plus. Sudha Chandran is playing the role of Princess Yamini Singh/Anky Ka Dada in this thriller serial. Adaa Khan as Sesha is another main actress in naagin malayalam serial. Nagakanyaka 2 will be launched on malayalam channel Surya TV on 19th June 2017 at 8:00 PM . The serial will be aired every Monday to Friday at 8:00 PM. The serial can be watched using SUN NXT application of Sun TV network
Tag: actual name of Nagakanya actress