Indian Space Research Organisation (ISRO)'s  prestigious project Mars Orbiter Mission(MOM) has reached another milestone after the successful test firing of MOM's Main Liquid Engine for four seconds as a trial before the final firing to get into the red planet's orbit early on 24 September 24, 2014. This project is also referred as 'Mangalyaan'. This spacecraft is built to study the atmosphere of Mars and is designed to orbit Mars in an elliptical orbit.

NASA's MAVEN orbiter has successfully arrived at Mars on 22 September 2014.


India hopes to enter Martian Orbit on Wednesday 24 September 2014. Arrangements are made for the LIVE telecast of the Mars Orbit Insertion.

It is India's first interplanetary mission and, if successful, ISRO would become the fourth space agency to reach Mars, after the Soviet space program, NASA, and the European Space Agency

Watch live on Doordarshan at 6.45 IST (am) on 24 September 2014, Wednesday.
Another way to watch the LIVE is though the webcast on ISRO website -http://isro.org/
The live is also available from Victor educational channel from 6.45 IST to 8.45 PM
WATCH LIVE 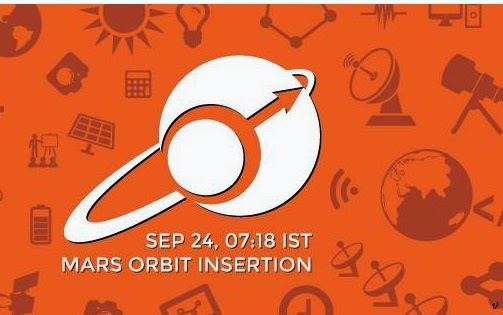 Now the MOM satellite is under the influence of the Sun's gravity after it had left the sphere of influence of the Earth's gravity at a distance of 9 lakh 27000 km from the Earth on December 4 last year.  Mars gravity is one third of the Earth's gravity. By 22 September 2014 the satellite will start losing the pull by the Sun's gravity as Mar's gravity will start pulling it. Through retrograde firing of the thrusters for four minutes, MOM satellite will be re-oriented by reducing the velocity of the satellite so that it is pulled by the Mars gravity. "If gravity of Mars pulls in the satellite to its orbit, the mission will be a success", say the scientists who are presently at ISRO headquarters in Bangalore.