✔ Vinodadarshan
Mazhavil Manorama
TV Show Winner
Nasif, Ann Marry & Vineesh, Aliyanz are the winners of D3 in the solo, pair and group category of D4dance on Mazhavil Manorama
The winners of D3- D4Dance Season 3- dance reality show on Malayalam Channel Mazhavil Manorama will be declared on Sunday, November 20th, 2016. The prize and mementos for winners in Solo, Pair and group category performace will be distributed by Cheif guest Suresh Gopi.  The grand finale of D3-D4Dance Season 3-will be aired on November 20th, 2016 at 6:00 PM.  The season 3 of D4 Dance was launched on 28 March 2016 at 8.30. Since then, the  show was aired every Monday to Thursday at 8:30 PM. The grand finale is termed super finale by Mazhavil Manorama this time.

This popular dance reality show  directed by Yamuna Yami and written by Ajmal Ea features mix of western, cinematic, contemporary and various other dance forms. The show aims to find the outstanding dancer of the year. Choreographer Prasanna Master, award-winning actress Priya Mani and professional Bollywood dancer and trainer Neerav Bavlecha are the lead experts and judges for the show

D4 Dance Season 3 has been three times bigger than the previous seasons due to the inclusion three categories, Solo, Pair and Group. This dance reality show  aims to showcase the best dancing talent and team from the selected contestants. 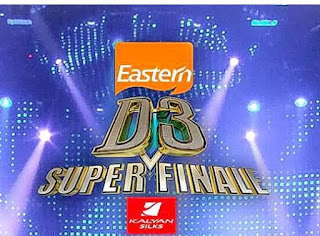