Mridhula Vijai (also referred as Mridula Vijay) is an Indian Actress known for her works in Malayalm Serials , Malayalam  and Tamil films. She is also a TV anchor and dancer.
Mridula  is known to Malayali audience through her role as Arya in Kalyanasougandikam, an Asianet TV serial and Krishna in KrishnaThulasi Tv series on Mazhavil Manorama.
Career 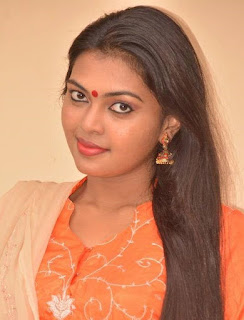 Mridula started her journey as an artist through dance. She started her acting career through a short film. She made her debut as a heroine through Tamil Movie Jeniffer Karuppaiya (2015) directed by Saravana Pandiyan. It was followed by a leading role in Malayalam Movie 'Celebration' written and directed by Manjith Divakar.

Mridula made her mini screen debut as the anchor of Kairali TV Reality Show ' Dance Party'.

Mridhula shot to fame through her debut Malayalm Serial Kalyana Sougandikam on Asianet. In this family drama she portrayed the role of Arya, a bold girl and one of the leading characters of the serial.  She later bagged the role of heroine Krishna, a helpless girl, in Mazhavil Manorama Serial Krishna Thulasi. The contrast of the two characted gave her enough opportunity to showcase her talent and versatality as an actress. These two serials made her popular among malayali viewers.

Personal Life
Mridual is the daughter of Mr and Mrs Vijai living in Thiruvananthapuram. She is currently pursuing B.A in  Psychology. She is a trained classical (Bharathanatyam) dancer. Cinema is her passion and she aspires to make it big in Films. Noted cinematographer Anandakuttan was her father's uncle and her grandfather also worked as film editor in malayalam movies.