National Films Awards - the most prestigious film awards in India organised by directorate of film festival  for the best films in 2015 was declared on 28 March 2016. S.S. Rajamouli’s magnum opus "Baahubali" has won the Best Film award at 63rd National Film Award. Amitabh Bachchan won the Best Actor award for his role in ‘Piku’while Kangana Ranaut won Best Actress for her role in ‘Tanu Weds Manu Returns.” This is Amitabh Bachchan’s fourth national award whereas for Kangana this is the third one after  having won best actress for Queen (2014) and  for best supporting actress for Fashion (2008).

Most of the film Awards for feature films were bagged by Hindi films this year especially by "Bajirao Mastani" by Sanjay Leela Bhansali, who also won the best director award for the same.  "Bajrangi Bhaijaan" won the Popular Film award

There are 30 categories in the feature films segment and 22 in the non-feature films one. In a newly introduced category, Gujarat was declared the most film-friendly State while Uttar Pradesh and Kerala earned special mentions.

The Dadasaheb Phalke Award - India's highest award in cinema- for 2015 is going to be awarded to veteran actor and film maker Manoj Kumar. The details of the winners of  national film awards 2015 are given below. 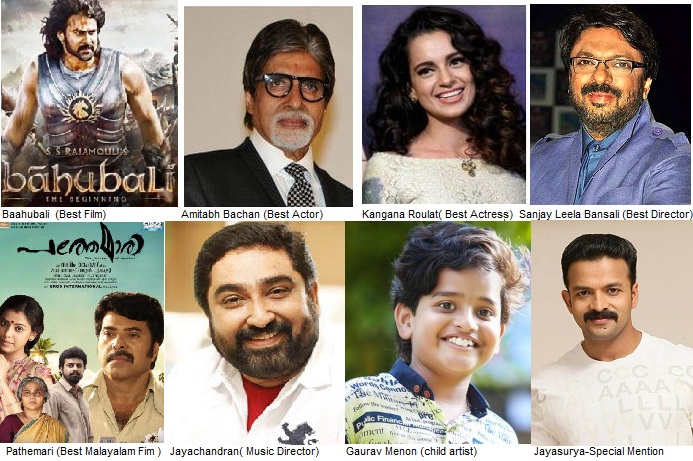 Pathmari by Salim Ahamed is selected as the best film in malayalam.  M.Jayachandran won the best music director award while actor Jayasurya got special mention as actor. Guarav Menon won best chaild actor award for his pefromance in Malayalam Movie Ben. He was also the winner in the same category at the 47th Kerala Stare Film Awards. The winners from Malayalam movies are given below.