Actress Muktha Elsa George (Bhanu)is going to marry Rinku Tomy. Rinku Tomy is the younger brother of singer Rimy Tomy. The engagement of Muktha with Rinku will be on August 23, 2015 and the marriage will be held on 30 August 2015 in Edappally St George church in Kochi Kerala.

Muktha is feeling blessed and conveyed her marriage news on August 11, 2015 as

Rinku is the son of late Tomy Joseph and Rani from Paala in Kottayam district. He is the younger brother of popular singer and anchor Rimi Tomy. Rinku is currently running an event management company(DNR events) in Kochi 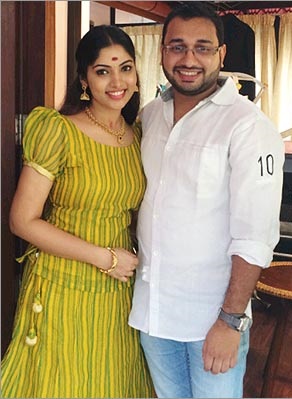 Muktha is the younger daughter of George and Sally. Her sister Doshy George is married and settled. Mutha began her acting career in a very young age with Lal Jose movie Achanurangatha Veedu. Following which she has acted many Tamil, Telugu and Malayalam Movies. She has also become a household name among Tamil audience though her films Thaamirabharani, Azhagar Malai, Sattapadi Kutram etc. Her recent movies are  Tamil movies -Vaaimai, Sagunthalavin Kadhalan, Vasuvum Saravananum Onna Padichavanga, Paambhu Sattai and Malayalam film Sukhamayirikkatte. In addition to this she has also established herself as a dancer and runs a beauty parlour in Kochi. She plans to continue her business endeavors and acting career after marriage.

We wish the couple happy wedding and blessed married life.