The first ever Mangalam Film Awards were declared on April 2015 First week.  Famous malayalam director/actor Balachandra Menon received life time achievement award. Mammootty won best actor Award for his performance in malayalam movie directed by Venu. Manju Warrier won best actress award for her performance as Nirupama in Roshan Andrews movie How Old Are You. Abrid Shine won best director award for the movie 1983 while Vellimoonga by Jibu Jacob was declared as the best film. The detailed list of first mangalam film awards are given below.

The awards will be distributed on 18 April 2015 in a function associated with the silver jubilee celebrations of Mangalam Daily. The award night filled with glittering shows by Stars, comedy performance by Kottayam Nazeer &team will add amusement to the viewers. The show will be hosted by Deepa Rahul Easwar and Jewel Mary.

Data and Venue of Award Night of Mangalam Film Awards 2015

Telecast Details of First  Mangalam Film Awards 2015
The show will be telecasted by Flowers TV , but the date and time is not yet out. 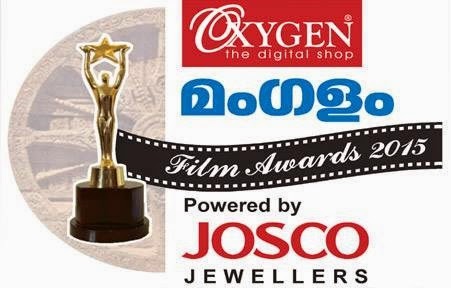