Big Malayalam Music Awards (BMMA) is to honour singers and musicians in the malayalam music world. The first edition of the award  was launched in November 2013 . 92.7 BIG FM, India’s largest and No. 1 radio network and CERA announced the launch of the CERA BIG Malayalam Music Awards 2013 powered by United India Insurance.

It is a popular music award where the four to five shortlisted nominations will be open to online voting and winners will be declared based on the votes.

92.7 BIG FM hosted the first ever exclusive Malayalam Music awards in Kerala in January 3 at Al Saj Convention Centre. The winners were announced in a show on 4 January 2014. 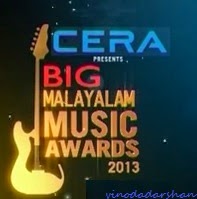 The award function is sponsored by CERA and United India Insurance.  Asianet Television will telecast Big Malayalam Music Awards 2013 on May 4 Sunday at 10:30 AM