✔ Vinodadarshan
Star Wedding
Actress/Anchor Alina Padikkal to marry Rohit P Nair
Bigg Boss Malayalam 2 fame Alina Padikkal has recently revealed in Asianet program Comedy stars that she is going to marry her longterm lover Rohit P Nair soon (see below). Alina has first declared her love relationship with Rohit in one of the episode of Biggboss malayalam Season 2.
Alina Padikkal engaged to Rohit P Nair
Alina Padikkal finally got engaged to her boyfriend Rohit P Nair in Thiruvananthapuram, Kerala on Wednesday 20th, January 2021. The couple exchanged rings in the presence of their family members and close friends.
In a recent episodes of Comedy stars the actress was a celebrity guest along actor Sajan Surya. During the show, anchor Meera Anil congratulates Alina on her engagement and the latter introduces her fiance to everyone. She said "Finally, my parents have agreed, Hooray. My fiance is Rohit P Nair, professionally an engineer, who is doing a business now. He is from Kozhikode, a foodie and one who loves bikes just like me. Rohit is a Hindu and ours will be an inter-caste marriage." Alina also shared that both of them share similar interests including their craze in vehicles. Thus the 6-year-old love story of Alina Padikkal is going to have a 'happy climax' with Rohit.
Alina Padikkal is the only daughter of Mr Philippos Padikkal and Bindu Philippose from Thiruvanathapuram, Kerala. After completing her schooling from Holy Angels’ ISC School Nanthancode, Thiruvananthapuram, she took graduation in Media Studies from Christ University, Bangalore, Karnataka. Alina is a women biker and was featured on an article in Metroplus of The hindu news paper.
Actress and Anchor Alina Padikkal started her career as television anchor through the program Butterflies on Malayalam Channel Asianet. She won Kerala State Television Award in 2005 for the above program and establish as a versatile TV host. She later hosted many shows and programs on various malayalam channels including Asianet Plus, Kairali TV, Surya TV and Kiran TV.  She is known for her performance as Nayana in Asianet serial Bharya
There were speculations about the friendship of  Alina with  Bigg Boss co-inmate Fukru, which the duo had denied and it was just part of Biggboss game. She was among the top contestants of Biggboss malayalam 2
Detailed biography of Alina is given here
Alina also shared a few photos of her with her fiancee Rohit P Nair 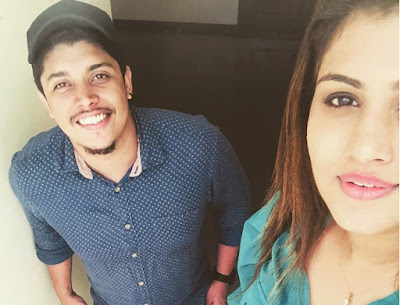 We will soon share her engagement and wedding photos. Congratulations to Alina and Rohit