✔ Vinodadarshan
TV Show Winner
Zee Keralam
Libin Scaria  is the winner of Sa Re Ga Ma Pa Keralam grand finale
The notable malayalam music show Sa Re Ga Ma Pa Keralam on Zee Channel has come to an end with its grand finale on August 15th, 2020.  The colorful event of grand finale of Sa Re Ga Ma Pa Keralam  was honored by actress Bhavana and  Anna Ben as celebrity guests. Singer Sithara Krishnakumar has also joined the judge panel, in the absence of Sujatha Mohan along with permanent judges of the show musicians Shaan Rahman and Gopi Sundar. .
Libin Scaria, hailing from Thodupuzha, lifted the trophy and received a cash prize of Rs 25 lac. The second position was shared by Aswin and Jasim while Swetha Ashok bagged the third spot in the final round of the competition. The fourth and fifth positions were bagged by Sreejish and Keerthana respectively.  Akbar Khan has won the title of ‘Best Peformer of the season’.
The show which was launched with 18 contestants chosen from different walks of life and age groups, won a million hearts with its unique format and exceptional talents
Anchor of the show- Jeeva Joseph-hosted music reality show 'Sa Re Ga Ma Pa Keralam'.Rebecca Santhosh hosted round 1&2.
Judges of the show - Gopi Sundar, Shaan Rahman,Sujatha Mohan 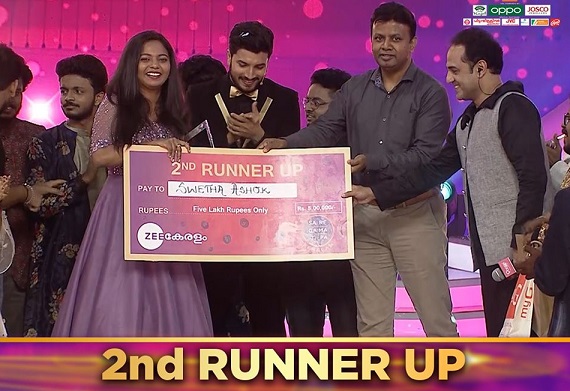