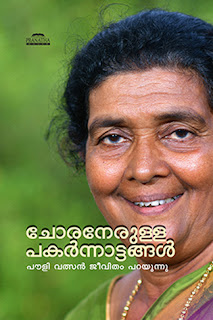 The autobiography of State film award winner Pauly Valsan was released in Kochi in December 2018 . The book 'Chora nerulla Pakarnattangal' was released by Ranji Panicker. She is the recipient of the Kerala State Award for Best Actress in 2017 for her performance in 'Ee Ma Yau' and 'Ottamuri Velicham'.

The autobiography will contain the details of the 40 years of theater drama of  Pauly Valsan, he experience with with many notable personalities inclusing PJ Antony and Thilakan. PaulyValsan wrote the autobiography with the help  of the journalist Joe Petter. Paul maintains to all its holiness when referring to the individuals and circumstances which she has suffered from . She narrates  her life which evolved through the fiery furnace of her experiences without any judgement or prejudices.

It is the story of a woman in a fisherman's family in Kochi Vypeen ,followed her hunger and poverty,  started acting in the first stage to help her the father . This  autobiography is supposed to include all her acquaintances with notable film personalities, childhood friends, her love marriage, suffering in and out.

She debuted as an actress through the film Annan Thambi. Later she acted in many films like Iyobinte Pusthakam, Amar Akbar Antony, Novu, Vanyam,Guppy, Dakini etc, to mention a few. All those who had the luck to watch Ee Ma Yau or the film Ottamuri Velicham would have seen her acting prowess on screen.

Chora nerulla Pakarnatttangal has an  John Paul and narrated by  Joey Peters
Art by Shanavas . The book is published by prathanabooks in Kochi. Its sols for Rs 150 per copy now.

Pauly Valsan hails from Vypin, Kochi, India from a big fisherman family, she is the elder one in the family and have 6 sibling's. She began her acting carrier through theatre plays as a child artist. Her husband Valsan is also a theatre artist. The couple have two children's. Pauly Valsan begin her acting carrier with theatre plays on early 1970's, and later on 2008 pauly debuted on malayalam movie Annan Thambi under the direction of super director Anwar Rasheed starring mega star Mammootty in lead role