✔ Vinodadarshan
TV News
Actress Varada Jishin  known for her role as Lekshmi in Malayalam serial Pranayam informed her fans that she is going to leave the serial as she is expecting a new member to her family. The last episode with her as  Lakshmi in Pranayam  serial will be aired on January 6th, 2017. It will be the 445th episode of the serial. 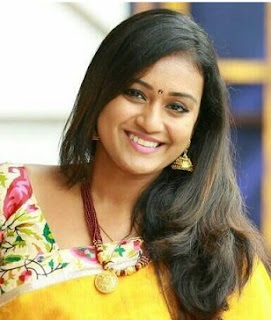 Pranayam is the remake of popular hindi serial Ye Hai Mohabbatein on Star TV and tells  love story of the Sharan and Lekshmi. Varada plays the role of Lekshmi and Srinish Aravind  portrays the character Sharan. The onscreen chemistry between the two actors and  their super natural acting made the serial worth to watch.

Actress Varada is known to malayali audience though her Television serials. She made her debut as Television Actress through Surya TV Serial Snehakoodu. Later she did Hridam Sakhi . She is known for her title tole as Amala in Mazhavil Manorama Television Serial Amala. She is also the anchor of Asianet plus show Raree Rareram Raro. Following the success of Amala, she grabbed the role of Lekshmi in Pranayam Serial. She was also part of Malayalam movies Sultan (2008), Makante Achan (2009), Uthara Swayamvaram (2010), Valiyangadi (2010), Kaadhalikkalama ( Tamil- 2012), Ajantha (2014).

Varada  married Actor Jishin Mohan on May 25, 2014. The marriage function was a very simple one attended by close friends and relatives. They are expecting their first child by March 2017. That is the reason for leaving the serial Pranayam. Varada and her co-star Srinish shared this news on facebook page as given below.

Update: Varada and Jishin are blessed with a baby boy named 'JIAN' on 23 March 2017


Who will replace Varada in Pranayam Serial?

(Dr)Divya Nair will play the role of Leakshmi in Pranayam Serial staring from January 7th, 2016. She has acted in many serials and is known for her role in Asianet serial Padasaram

Actress Varada's detailed post on the reason for leaving the serial

The hero of the serial Srinish Aravind also congratulated Varada and thanked her for the support.