Actress Sini Varghese married Antony KM on 14 November 2015 at St Mary’s Church at Panathur at 3.30 pm. The traditional christian wedding ceremony was followed by a grand marriage reception at Thattil heritage in Odayanchal at around 6 pm. The engagement of Sini Aleyamma Varghese with Antony was held on 11 November 2015 and the betrothal ceremony in church was  attended by close relatives and friends. The wedding cermony and reception photos were shared by the actress on her social media pages.

The groom Antony is a masters degree holder from Visvesvaraya Technological University,in Karnataka. The popular malayalam movie and film actress Sini Aleyamma Varghese is better known by her stage name Sini Varghese and hails from Kasargod. She completed her education from Kannur and Annamalai University. She is also a trained classical dancer.

Sini Varghese started her career as television actress through Surya TV Serial Koottukari. Since then she was part of many hit serials like Rudra Veena, Kunjali Maraykkar, Sthreedharam, Pranayam,Vellanakalude Nadu etc. She started  her hourney as film actress through Sanjeev Babu's Spider House in 2014 and has also acted in films Happy Journey Ulsaha Committie,and Apothecary. In addition to this she also acted in a tamil film (Kondan Kodukakn)  a tamil serial under the banner of Balaji Productions. Recently she appeared in many shows including Asianets Dont Do Dont do.

Recently, she is known now for her role with negative shades, the character Mayoori in popular malayalam serial Sthreedhanam directed by Krishnamoorthy and Thanuja in Pranayam serial. Now is she is part of comedy serial Vallanakadude Nadu on Asianet which is aired  on every Saturday at 10.30 pm.

We wish the couple a very happy married life! 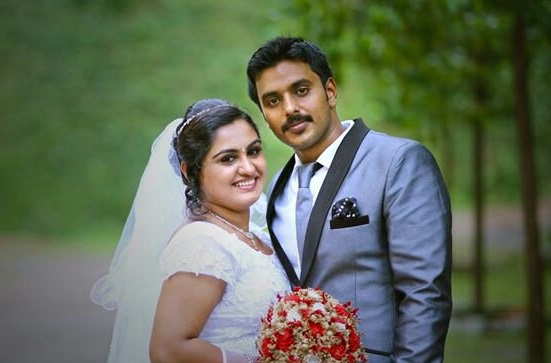