✔ Vinodadarshan
Awards
Mazhavil Manorama
The popular Cera Vanitha Film Awards powered by Josco Jewellers was held on 15 February 2015 at Kochi Willingdon Island Bristow Ground. The awards in various categories for movies released in 2014 were made based on popular votes conducted by Vanitha and Malayalam Manaoram. Total of 22 Awards were distributed. The award ceremony was attended by film personalities in India.


This year famous director IV Sasi won the life time achievement award. 1983 won the award for best film. Mammootty and Manju Warrier won award for best actors in male and female catagories . The award function will be telecasted by Mazhavil Manorama channel. The details of the award, telecast time and date are provided below. 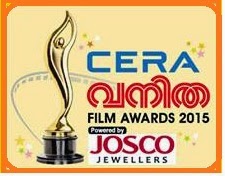