Popular malayalm actress Sharanya Sasi has decided to quit the very popular Karuthamuthu serial for reasons better known to her. She posted on her facebook page that she is going to quit Karutha Muthu due to the unprofessional attitude of the crew of Karuthamuthu serial team.

The messages appeared on her facebook page on 22 February 2015. 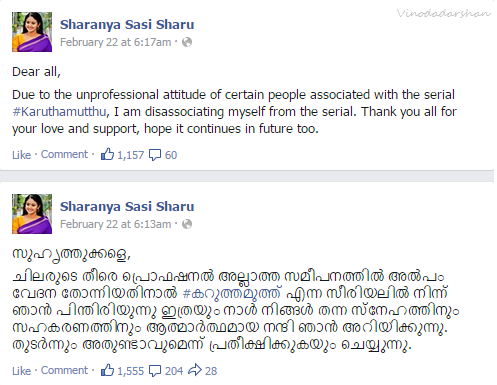 Karutha Muthu serial on Asianet malayalam channel is among the five top rated program on malayalam television now. In this serial Sharanya portrays the role of  Kanya, the sister of the character Karthika played by Premi Viswanath, and the sister in law of the hero role of Balachandran by actor Kishore Sathya. The performance of the actors playing the leading roles were the highlight of the serial, especially the negative role of Kanya by Sharanya.

The effortless performance by Sharanya was one of the main reason why the viewers glued into the TV screen even at 10:00PM. Now it will be a huge task for the Karuthamuthu team to find an actress that match up with Sharanya Sasi. We will soon update the details.