Famous malayalam film and Serial Actress Reshmi Soman married Gopinath at Guruvayoor Temple this week end(March 2015). The bridegroom Gopinath is working as the regional head of a company in Gulf.  This secret second  marriage was attended only by close relatives and friends. The actress haven't disclosed this news to any media. This news came to lime light through online media. It is an arranged marriage with the blessings of both of their families. 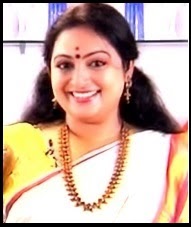 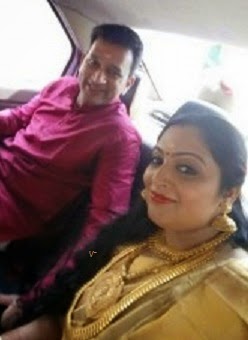 Actress Reshmi Soman married serial director A.M Nazeer in July 2001 in a secret registered marriage. Their love blossomed when Reshmi worked with A.M Nazeer's serial Bharya. Even after marriage Reshmi was very active in television serials. However  problems started in their life and they got divorced.  But they kept their private life away from media.

Reshmi started her film career in a very young age with Magrib directed by P.T Kunju Muhammad. It was followed by Ishtamaanu Nooruvattam and Ente swantham Janakikutty . However she switched her career from film to television as she found herself very comfortable with serials.Some of her popular serials are Hari, Thaali, Akshayapathram, Bharya, Swararagam, Sapatni, Akkarapacha and Makalude Amma etc

Following the break up with Nazeer she also acted in serials including Penmanasu. Later she took a three year hiatus from serials and completed postgraduation in Business Administration (MBA) with flying colors. Recently she hosted a cookery show (Super dish in Surya TV) and appeared in Mazhavil Manorama's TV programs -Onnum Onnum Moonnu and Ivide Ingane Yanu Bhai.

A.M Naseer is back with another serial Dathuputhri following  the completion of Pattu Sari.

We wish them a happy married life!