Ningalkkum Aakam Kodeeshwaran program on asianet has anounced a special chance to enter the show. This golden chance is only for Idea subscribers. The entry Question for Idea Users will be telecasted  from - November 7 to 9, 2014 @ 6:30 PM. 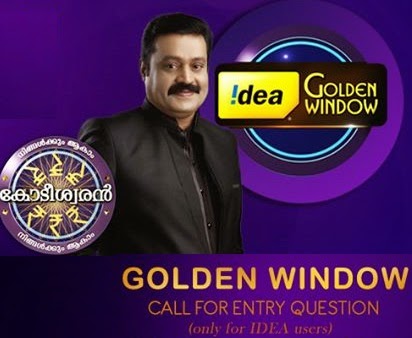 Ningalkkum Aakam Kodeeshwaran Season 3 seven Entry Questions was aired from 30 October to 5 November 2014. The details are given below

How to register to Kodeeswaran 3 on Asianet through SMS?.. 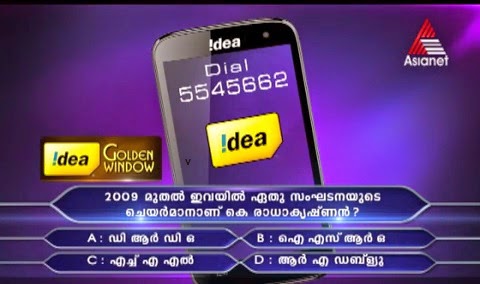 Since 2009, K Radhakrishnan has been the chairman of which of these organizations ?
A. DRDO
B. ISRO
C. HAL
D. RAW

Which of these events did Brazil host in 2014?
A. FIFA World Cup
B. Winter Olympics
C. ICC World Cup
D. Commonwealth Games

On 31st October 2014, Devendra Fadnavis was sworn in as the Chief Minister of which state?
A. Haryana
B. Madhya Pradesh
C. Gujarat
D. Maharashtra