Nisha Sarang and Anila Sreekumar were declared as the winners of Celebrity Kitchen Magic show on Kairali TV. It is the season 2 of Kitchen Magic Cookery Competition Show hosted by Dr.Lekshmi Nair. There were six finalists in the grand finale competing for the title

Celebrity Kitchen Magic is a first of its kind Malayalam cookery reality show on Kairali TV, hosted by celebrity chef Lekshmi Nair. In the season 2 of the show , named as celebrity Kitchen Magic , TV actors were the main contestants. The participants were supposed to display their culinary skills in innovative, creative, healthy and hygienic ways in the competition, which is judged by chef Lekshmi Nair and actor Krishna. Various innovative rounds were included in the show to test the cooking skills and the competition span over an year.

In the grand finale of the show, Veena was the anchor. Dr . Lekshmi Nair and Actor Krishna announced the names of the winners. Kairali TV Managing director John Brittas handed over the prizes during the function. 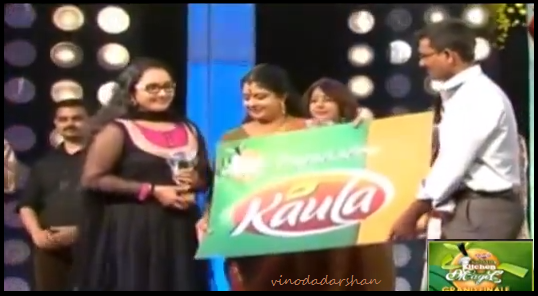 The prizes will be shared among winners.

Congratulations to the winners of celebrity kitchen magic on Kairali TV