✔ Vinodadarshan
TV Serial-Cast
Parasparam is a Malayalam Television Serial on Asianet directed by Sudheesh Shankar and produced by Ross Petals.
This is the remake of popular hindi serial Diya Aur Baati Hum broadcasted on Star Plus. The hindi version is written by Sumeet Mittal and Rohit Raj Goyal. Because of its popularity this serial is dubbed or remade into various Indian languages  like Tamil (as En Kanavan En Thozhan), Telugu (Ee Tharam Illalu), Bengala (Tomay Amay Mile) and Kannada (Akashadeepa) 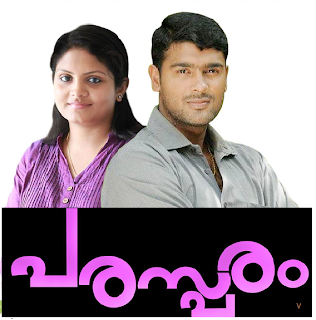 This serial depicts the true love between a husband and wife. This is the story of how a husband becomes wife's strength and how he supports his wife to fulfill her dream in her life. The central characters are Deepti and Sooraj. Deepthi belong to a middle class family ended up in a marriage relation with Sooraj under strained circumstances. But her dream is to became an IAS officer. She couldn't neither complete her eduction before her marriage nor was in a position to dream about in her in laws house. But with the support of Sooraj she could complete her education and training for civil service. Watch the serial to learn about the ups and downs in her life on her path to achieve the dream of her life through her husbands support.