Actress Mamta Mohandas TV News ✔ Vinodadarshan
Now, it is confirmed that Actress Mamtha Mohandas was granted divorce to her husband Prajith Padmanabhan by the Ernakumam family court on 19 August 2013.

South Indian actress and playback singer Mamta Mohandas got married to her family friend Pregith Padmnabhan on December 28, 2011. He is a business man in Bahrain. But the couple has decided to divorce. Mamtha Mohandas revealed the divorce news to a national news paper. They got engaged on 11-11-2011 and the decision to divorce was declared on 12-12-2012. 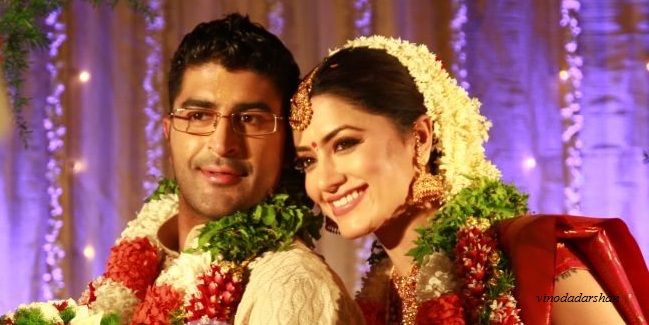 According to Mamta Mohandas the decision was taken together by both of them and they were living separately for the past few months.To terminate the one year old married life, a joint divorce petition will be filed on January 2013.

She said that, she is happy having learnt that they both have two different personalities and realized that it will be difficult to live together further. The judgement of divorce petition has postponed to August 19th earlier. Because Mamtha was staying away from Kerala for her treatment.

South Indian actress and playback singer Mamta Mohandas got married to her family friend Pregith Padmnabhan on December 28, 2011. He is a business man in Bahrain. But the couple has decided to divorce.Mamtha Mohandas revealed the divorce news to a national news paper.

The couple, who was engaged on November 11, tied the knot on December 28, 2011, in Kozhikode. Her decision to get a divorce has come as a big shock for many in the industry. The actress announced today that the legal proceedings will start soon.

The multi talented Actress Mamatha Mohandas was engaged to Pregith Padmanabhan on 11.11.11, the special day is going to divorce on 12.12.12 (today).

"We are two different types of people and cannot journey together long any more. From last few months, we started living separately. We all try to mend some things for leading a happy life. I am trying to be happy at least with work. When my personal life was draining out all my energies, work kept me busy offering solace.

Mamta Mohandas also said that she will continue to focus on her career. She is currently busy with a number of films, and also has a music album lined up for release.

I was hastily rushed into marriage before understanding each other. I had no other options than going for divorce. I will not reveal the details as why my marriage did not work. This is not easy for anyone, especially my family. But, they believe in my choice. I am grateful to parents and my friends for standing besides me," Mamata Mohandas made 12.12.12 a sad memory in her life.

For the actress, it’s a big decision. Mamta Mohandas says she has no  other choice than to part ways with her husband Pregith Padmanabhan. “Pregith and I have decided to divorce. And we have decided to move on with our individual lives. We have realised that we cannot sail on the same boat,” says the actress.

Till now Mamta has acted in over 30 films and is now doing Malayalam movies opposite actors like Mohanlal, Prithviraj and Indrajith
Older Posts Home