✔ Vinodadarshan
Star Wedding
Malayalam serial and movie actress Yamuna  has found love for the second time in her life. The actress has tied the knot with Devan Ayyankeril  at Kollur Mookambika Temple on Monday (December 7).The traditional Hindu wedding was attended by her daughters and close family/friends.
Yamuna said to a malayalam daily that  "Devan Ayyankeril is my husband's name. He had been living in USA working as a psychotherapist. I strongly believe that Sree Padhmanabha Swamy heard my prayer for a good human being as my husband and it materialized on December 7 th at Kollur Mookambika Temple,"  She also added that  "My 10-year-old daughter Aashmi and 15-year-old Aami jokingly told me they are not at marriageable age yet as someone suggested online. I hope you will all support me as you always have and thank you all. Your Yamuna".
Devan hails from Mavelikkara and has been residing in USA for the last 30 years. It is also second marriage for Devan. He has a daughter(Fiona) from first marriage who is currently in college.
In a recent interview she said even though her friends and family were constantly asking her to rethink about marriage as it was more than 5 years after divorce, she never felt the need to do so as  she was busy with her daughters and career. "But, when the lockdown started, my kids were at their father's place and for months together, I was stuck within the four walls of my flat. Words can't describe the mental pressure I was going through of not having anyone near me. That's when I realized I needed companionship and decided to get married," she said.
Yamuna debuted into the malayalam television through an album song for Onam in Doordarshan Malayalam. It is followed by a telefilm Punarjani. She later acted in many serials like Jwalayayi mainly in negative roles.  She now acting in Amma , Amala and Chandana Mazha. Her role as  positive character Madhumati, mother in law of the character Varsha,  in Asianet serial Chandanamazha is different from the usual villain characters she played in many serials and made her popular.Yamuna has acted in many movies in Malayalam language, mostly in character roles. Some of her movies include Meesa Madhavan, Stalin Sivadas, Meerayude Dukham Muthivinte Swapnam, War and love, Pattanathil Bhootham, Oru Korean Padam etc
Yamuna's  recent photo with her husband Devan is given below. 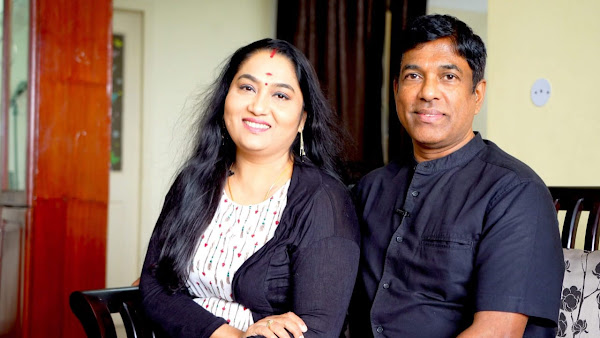 Yamuna-wedding Album -go here
Yamuna <-go here for the biography
Yamuna is originally from Kollam in Kerala. She was married to Malayalam Film director S.B Mahash ( Changathipoocha, MM big father Abhiyum Njanum ). But they seperated and divorced five years back.  They have two daughters named Aami and Ashmi.