South Indian actress Padmapriya married her long time friend Jasmine Shah on 12 November 2014 at Arya Samaj in Mumbai. The marriage was a strict family affair attended only by close family and friends.

Jasmine Shaw is originally from Gujarat. Jasmine grew up in the town of Silvasa in the Union Territory of Dadra and Nager Haveli where he completed his high school. He completed B.Tech and M.Tech in mechanical engineering from Indian Institute of Technology(IIT) Madras. He is also a graduate from Columbia University's School of International and Public Affairs. Jasmine is currently working in New Delhi as the Associate Director of Policy at Jameel Poverty Action Lab, South Asia with its head quarters in  Massachusetts Institute of Technology.  Jasmine was the campaign Coordinator of the Janaagraha and Tata Tea initiative known for his ‘Jaago Re’ One Billion Vote Campaign.

Padmapriya and Jasmine met in Newyork while both of them were  pursuing their higher studies at Columbia and Newyork Universities. She took a break from movies to complete Masters from Newyork University. She was doing a research on the Economic Affairs of Public Sectors associated with her study at the Newyork university and they came to know each other during that period and fell in love. 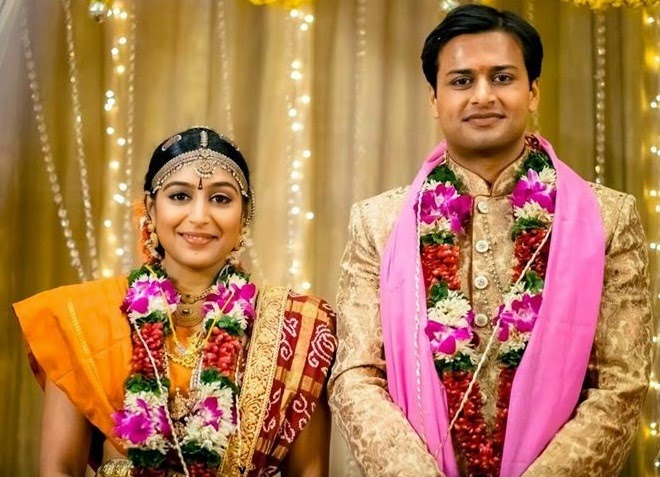 Padmapriya is the daughter of Janakiraman, a brigadier in the Indian Army, and Vijaya. She was born in Delhi and brought up in Punjab and other cities in India. She is a trained classical dancer and won Miss Andra pradesh title in 2001.

Padmapriya made her debut in Malayalam with Kaazhcha directed by Blessy. She has done more than 48 films across all Southern languages (Malayalam, Tamil, Telugu and Kannada) and also in Hindi and Bengali. She got most of her notable roles in Malayalam movies.


We wish the couple a very happy marriage.