Kairali TV anounced the launch of the new season of Aswamedham,  in 2014. The audition for the show is going on.

Aswamedham  is a reverse quiz show program in the format of twenty questions, on Malayalam Channel Kairali TV.  The program is anchored by Grand master G.S Pradeep . The season 1 of the Ashwamedham in 2002 entered the limca book receords for reaching 500 episodes and the host G.S Pradeep got the title 'Grandmaster'.

The second season in 2005 on Kairali TV was not so successful as the first season. 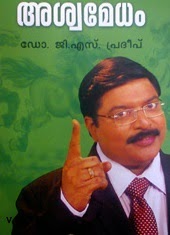 The audition for Ashwamedham in 2014 was held at Kozhikkodu and Kannur. Grand Master G.S Pradeep interviewed the interested participants. The audition at Kannur was held at NGO Union Hall, Kannur on 23 August 2014. The host of the new season is  G.S Pradeep.

Time -Audition start at 9.30 AM in the following venues